Ralf Schilberg, born in 1968, studied philosophy and media theory. The camera has been with him all his life. His most recent portrait work is mainly about the play between light and dark. His current series "duesseldorf faces" with black and white photographs of Düsseldorf personalities (e.g. Dieter Nuhr, OB Thomas Geisel, DFB Vice President Peter Frymuth, actor Armin Rohde, Tonhallen director Michael Becker, etc.) takes up this principle. 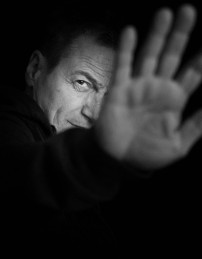 A large part of the image and the person are hidden in the dark.
Darkness has always fascinated people. It is, as it were, a place in the semantic underworld with a diffuse information situation - where we suspect rather than we know.
All we know is: "We are somewhere" or "There is something". And that is precisely what makes the darkness so particularly attractive photographically. Because all of our sensory input channels are on alert, and what suddenly emerges from the darkness attracts our full attention.
Light and shadow are in a dialogue, embedded in a harmonious relationship, which appears thanks to the photo. "It's like the invisible becomes visible."

A game of the tides. However, the focus is not on the spectacle of nature, but on a model that Ralf Schilberg stages on the beach in black and white clothes. A game of strong contrasts while simultaneously depicting nature in finely graded shades of gray.

Ralf Schilberg poses the model in a very reduced and stylish manner and creates a strong tension between man and nature and the extreme of black and white.