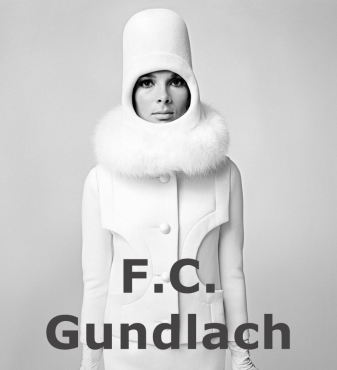 Noir blanche - Galerie für Fotografie presents the exhibition "VISIONNAIRE" by F.C. Gundlach with very special and some never before shown pictures in an exhibition, probably the most important photographic period of F. C. Gundlach. It was the 60s in Paris, where he worked with the most famous fashion designers of the time.

With this exhibition, Noir blanche - Galerie für Fotografie pays tribute to one of the most famous and important photographers of the post-war period, and his pictures have become icons of photography.

In the final phase of preparations for this exhibition, this exceptional photographer and special person passed away on 23 July at the age of 95.

"Star photographer F.C. Gundlach reports from Paris!" was the headline of the Deutsche Illustrierte in 1955 and showed the latest creations of Parisian haute couture on three double pages. Christian Dior had just presented his Y-line, Hubert de Givenchy and Jacques Fath showed dense button-fronts and brocade.

Always on the pulse of the times, F.C. Gundlach was enthusiastic about the fresh, graphic designs and the clear lines of fashion. With his unerring photographic eye, he staged sporty designs by Pierre Cardin, André Courrèges, Yves Saint-Laurant, Nina Ricci in the studio and on the streets of Paris.

The 1960s! They were the decisive decade of the 20th century for F.C. Gundlach. Emancipation and the pill, the Beatles, Op Art, the student movement and a new openness in thinking changed society. This was accompanied by a new demand on fashion. It had to be sporty and dynamic. It had to be elegant and modern. F.C. Gundlach reflected these wishes in his photographs - contemporary and timeless at the same time.

The exhibition "F.C. Gundlach. Visionnaire" at the Noir blanche Galerie für Fotografie shows photographs taken between 1962 and 1966 that are now icons of this period.