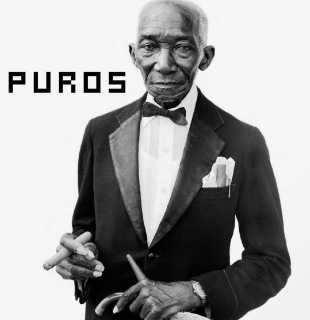 Puro means Spanish cigar. But also "real". Puro is a synonym for Cuban cigars. Cuba finds its national identity in the cigar, it is both cult and commercial. It is a cultural component. And she always shone and still does today. It has the greatest appeal to intellectuals, writers, musicians and adventurers from all over the world.

Smoking a cigar and dealing with tobacco runs like a myth through all layers of Cuban society. Today there is (still) a generation of older women and men who, up to the beginning of the last century, represent this long tradition. It is the "faces of Cuba" in which the melting pot of many nationalities is shown directly and without make-up.

That is Cuba "puro".

Joop Greypink captured this spirit of Cuba in photographs. With the help of Cuban friends, he researched women and men who have been dealing with the tradition of tobacco and cigar for a long time - these are farmers and cigar makers, locomotive drivers and musicians, writers and traders. They represent tradition and myth, but are also a mirror of contemporary Cuban society.

These carefully selected people were photographed by Joop Greypink directly, without make-up and unaffected. They look into the camera and make contact with the viewer with their eyes. In this direct contact between the viewer and photography, the physiognomy of the photographed people makes their individual history but also the common "Cuban" legible.

This photo series is an encyclopedia of the Cubans, which shows how the photo can reflect the spirit of a society and its people.