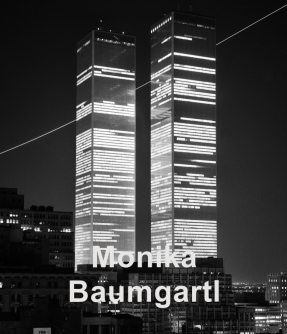 Monika Baumgartl(* 1942 in Prague) is a German photographer, performance artist and representative of Concrete Photography.

Monika Baumgartl trained as a photographer in Hofheim am Taunus from 1966 to 1968. She then moved to Düsseldorf, worked as an actress (including as a member of Die Bühne) and was assistant to the German filmmaker and video painter Gerry Schum. Since 1970 she has been active as a photographic artist. From 1970 to 1976 she organised performances and joint exhibitions together with Klaus Rinke.

Monika Baumgartl had her first solo exhibition in 1974. She participated in Documenta 5 in Kassel in 1972 in the section Individual Mythologies: Self-Representation - Performances - Activities - Changes and was also represented as an artist at Documenta 6 in 1977.

Monika Baumgartl's work is represented in numerous collections and museums in Germany and abroad.